You are here: Home / Travel / Sapa – Trekking in the Rain | Outlanderly 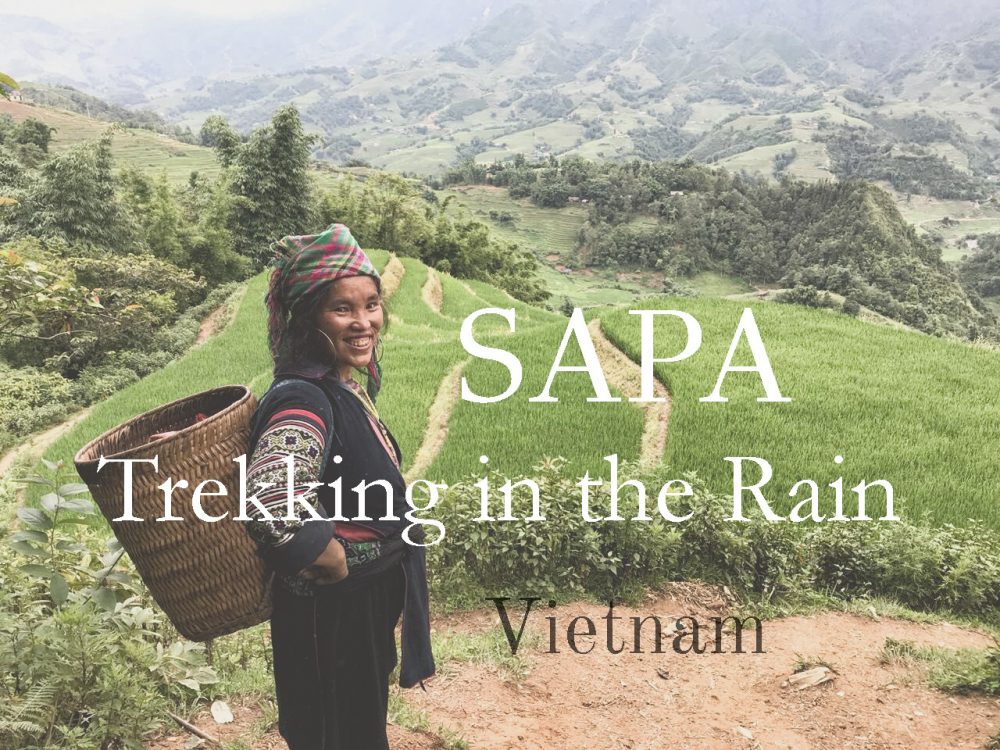 "When I arrived in Sapa, after spending six hours on a sleeper bus, I looked through the window with huge disappointment. The rain didn't stop. I looked worryingly at my friend and we were both thinking 'What are we supposed to do in this rainfall?"

On the bus journey to Sapa, I could only catch small glimpses of the rice fields in the valleys hidden in the fog.

“I’m really at Sapa,” I thought to myself. The place that I have always heard about and seen on postcards, the breath-taking scenery filled with layered rice terraces, lush vegetation, steep valleys, gorgeous mountain peaks, and trails. And the rain was going to ruin my 2-day trek.

It's Wet in Sapa. What now?

I knew that traveling to Sapa in the wet season would surely present some challenges to my travel plans. But I was hoping it didn’t mean my plans were going down the toilet.

Locals told me that Sapa weather can change within minutes which I didn’t believe. Sapa’s ‘four seasons in one day’ really does live up to its name. It’s interesting to experience it all especially when you’re used to stable weather- bright spring in the morning, sunny summer at noon, chilly fall in the evening and a sharp winter at night.

The van driver dropped us off at Roxana Hotel along with our luggage, without saying a word he pointed to the hotel on top of the hill. Once he drove off (god knows where) our group of 5 climbed 40 steep steps with heavy luggage. Some of the travelers joked that we had already started our trek.

Some of us hungry and angry waited to try some local dishes before we started our first trek in the afternoon. The view from the restaurant balcony could have been better, hence the eye soar construction happening at the front of the hotel, and the nonstop rain.

For a moment I beat myself up for booking with a lousy travel agency and during this weather, until two small women approached our table.

Everyone stopped eating right away. These women were dressed in bright retina shattering colors, with intricately styled hair, held back by silver combs.

"Hello everyone, my name is Khoua and this is Chue. We will be your tour guide for today."

Remembering their names was hard enough the first time. All I could do was stare at them with fascination. They wore long blouses decorated with batik flowers over short trousers, and wrap long scarves around their legs.

That van driver finally came back for us and so we headed to the mountains. Sapa is home to diverse hill tribes, breathtaking landscapes, layered green rice terraces and the highest mountain in Vietnam, Fani Si Pan, the Alps of northwestern Vietnam. The Sapa region is known for its scenic mountain landscapes and the distinct cultures of many tribes such as the Hmong, Red Dzao and Phù Lá ethnic groups.

Through our van window, I  saw so many of them walking along the trails and going about their daily lives.

To be honest I couldn’t figure out which group our guides Khoua and Chue belonged to. There were just so many of them. Red Hmong, Black Hmong, Flower Hmong, Green Hmong, Striped Hmong, and even Variegated Hmong.

Our guide’s friend accompanied us along the way. She was always full of smiles.

Just 3km from Sapa Town, we made our way to  Cat Cat Village, the starting point of our trek. I sighed with relief that it’d stopped raining, but nothing had prepared me for what the downpour had brought.

"The Typhoon left, but watch out for the trails," Chue said in a kind voice

I didn’t know what she meant until I watched people around me fall right, left and center as I too fell numerous times. The paths were muddy and slippery on uneven rocks.

The Typhoon that had recently passed Northern Vietnam ravaged the paths. All I could see was dirt and cow poop. It was a conflicting moment, trying to keep my balance to avoid falling into a deepwater rice field and to fully appreciate the picturesque views. My little guides could see that I wanted a break and enjoy the views.

Surrounded by nature, ducks, buffalos and lush rice fields. Sapa was revealing its beauty to me. I passed by kids coming from the school, and the locals at the work. Whether it’s working in a paddy field, gathering wood, collecting herbs, sale items or food or clothing and fabrics.

The sun was going down when I arrived at my home stay. I was greeted by San, a smiley woman with two kids running around her. Reaching my final destination of the day, I took off my dirty shoes and felt glad the first trek was completed.

It’s true about what the Local Vietnamese had told me. The people here are not the same as the ones I met in Hanoi or Ho Chi Minh. Hmong is confused with Chinese, Vietnamese or Thai because the Hmong are from and still live in Southeast Asia. However, by observing the traditional clothing, it is obvious that the Hmong are unique.

Linguists and Ethnologists can’t really pinpoint where they originated from, but Hmong presence can be found in rugged uplands of northern  Vietnam, Laos, Thailand, and the eastern parts of Myanmar (Burma).

Khoua and Chue mentioned they were Black Hmong, although with so many tribes women wearing similar colors, it became hard to tell which group they belonged to. To my surprise they spoke very little Vietnamese, in fact, their English was pretty good.

I sat sipping my hot tea leisurely whilst looking up front. The home stay had a fantastic view of the staggeringly beautiful mountains surrounding the very picturesque Sapa.  The scenery is beyond beautiful and it’s almost like you’re in a movie or a fairy tale. The little voice in my head comes up in such moments of extreme witnessing of nature ’s wonders that I ask yourself “This place can’t be real, or is it?”

Three siblings playing in the mud. Their mother seemed to be yelling at them to stay off the path.

Motorbikes are not only used to get from A to B.

This lady parted after unsucessfully closing a sale from trekkers.

The Hmong boy just ran inside hiding from his siblings.

The morning greeted me with heavy rain, mist, and chills. The freshly made pancakes and hot coffee were more enjoyable, with views of the misty waterfalls. Sapa mountains and the rice terraces are a stunning sight during rooster hours, the sun rising and the fog between the hills creates a unique scenery

The last day of trekking was supposed to be shorter, but the trails proved challenging. Muddier, dirtier paths, ups and downs, steep hills and swollen waterfalls. Through the heavy rain,  I was seeing the landscape changing a lot, from rice fields with water buffalos to a bamboo forest, and river crossing.

Children as young as 9 and 10 years old, expert trekkers walked past me like it was a piece of cake. I would hold onto bamboo trees for seconds just to avoid the massive muddy puddles while the children walked peacefully with their umbrellas.

Each time I came to a tough section of the trail, my guides held my hand making sure I didn’t roll down a hill.

Just when me and my group thought our trek was coming to an end, we saw the road to our meetup point was flooded and the dam was broken. The currents were strong pushing all the trash and anything along with it into the dam.

There were two options: walk back 3 hours and get lost, or take the shortcut. Holding hands our group crossed the huge body of water, walking sideways to get to the other side. I personally struggled.  The currents were too strong, I could barely move my legs and felt myself slipping. The Spanish guy beside me knew I was terrified, held both of my hands and walked me safely to the other side.

I gazed up at the waterfalls feeling relieved that the trek was finally over. Moments later I found myself surrounded by different Hmong women.  They all had the most beautiful smiles.
“You look pretty"  "Buy from me,” while they put a silver bracelet on my wrist.

When I imagined going to Sapa those many years ago, I had a preconceived idea of what Sapa would be like -an unexplored wilderness, remote hilly mountains, where lives of traditional ethnic groups are unaffected by the modern world.

Now that doesn’t mean you shouldn’t visit Sapa. It is truly beautiful and will take your breath away. It is still possible to have a memorable experience, just be selective of the treks.

Book yourself a Sapa homestay experience with a Moons Travel Agency. It will allow you to get a glimpse of the local culture and support the local community.

Sapa - Trekking in the Rain

Trekking in the rain isn’t for everyone I must say.  I found it surprisingly fun and challenging, despite the risks. The stunning scenery had me in so much awe that the muddy trails, the heavy rainfall, and the fog weren’t a problem. There will always be some places that leave a lasting impression on you. Places that you’ll remember and make you yearn to return someday. Sapa is that place for me. Would I do it again in the rain? Hell yes, I would.

You also might want to read Travel Tips for First Timer’s in Hanoi.