You are here: Home / Travel / Taiwan / Trading in London Life for the most underrated city in the world|Outlanderly

In 2013 I quit my job in design and moved halfway across the world to Taipei, Taiwan.

Fresh out of university at 22, London felt like the most exciting place in the world to live. As a young adult from the suburbs of North London, I was beginning to enjoy the hustle and bustle of metropolitan life, nights out in central London, the cultural scene and, as an aspiring accessories designer, the job opportunities. Fast forward four years, I was boarding a plane to Taiwan, a place I knew little about, and who would have known, Taipei would become my new home.

London at times felt ugly. I grew tired of working constantly, and never seeing the sun. The city life moves so quickly, it sweeps you up in a whirlwind of social life, work, and  you’re rarely home. You’re spending up to 30 minutes on the tube to meet your friends or a date, but really wished you hadn’t bothered in the first place.

I wasn’t entirely unhappy in London. I had (have) amazing friends, a supportive family, and after many mundane jobs, I was getting started in my career.  I wasn’t a fugitive on the run or trying to ‘find’ myself. What I always knew was there’s so much more to life than London. Leaving my ‘settled’ life and living in another country was something that I needed to do; and it’s the best decision I’ve ever made.

How did I end up here?

The reaction from friends and family upon hearing that I was packing up and leaving were mixed. It was either “I’m really happy for you” or “how could you not want to live in the best city in the world?”  They were used to me traveling so often from London to Paris, but the thought of moving somewhere across the world they believed I would “miss out.”

Excited. There I was in my favorite little cafe with my little netbook along Islington high rd, researching living abroad when I noticed a familiar face sitting beside me. He was a teacher trainer from the language school where I got my teaching certificate. To my delight he was happy that I interrupted his solo coffee time and we chatted for hours about his years living abroad in places in Asia, such as China, Japan and Vietnam. It was when he mentioned “ Taiwan” that my eyes lit up.

I’d never even been to Taiwan on vacation, let alone known much about the country, only that my doctor’s daughter was studying Chinese there. I didn’t even utter a word of Chinese. Neil spent two years in Taipei which he recalled was the time of his life and reckoned that “I’d love it, too”.

And so less than two months after applying for jobs in Asia, Taiwan would be the place. I couldn’t believe it,  I was moving to a port city called Keelung in Taiwan, surrounded by mountains and lush green scenery. I couldn’t wait to settle into my new apartment, make new friends and start work that didn’t involve long commutes on the London underground.

While I was full of excitement, I knew it wouldn’t be easy. I really hadn’t. I knew the challenges of adjusting to a new culture would be knocking at my door. In fact, it took very long time for everything to fall into place.

I arrived at the end of Chinese New Year,  during the rainy season. It rained every day with most streets flooded, it seemed British weather never left me.

Wearing rain boots every single day, high humidity and hair drenched in what locals call acid rain, I began regretting my decision to move to Keelung instead of Taipei. The novelty of living in a port city with a romantic waterside view lasted a month. I recall gasping for air after walking past Keelung’s smelly harbor, so smelly it puts stinky tofu to shame.

It was hard settling into my new job as an English teacher. They do things differently here. Navigating cross cultural communication in a new work culture was no easy feat and still remains a struggle today. Not to mention colleagues both local and foreign weren’t exactly forthcoming. I quickly began to realise how much my British-ness and being a Londoner hindered me in the workplace. My other two colleagues were also hailing from the UK, from places I didn’t know existed.  I never knew being from London meant you were a snob, and insular.

A change of weather

On top of that I really didn’t know anyone– for the first few months, my only ‘friends’ were bartenders, some expats from bars, and locals who wanted to practice their English. My language exchange partners became my friends, and then my tour guides. I was very thankful that they showed me around making 1 year in Keelung more bearable. Scooter trips to cultural sites and to the mountains showed me a different side to the city. Keelung would no longer be just a port city with a punjent smelling harbour, it’s a place with majestic mountains and picturesque backdrops that make you speechless – all the reasons that I initially came to Keelung for. A bit of green and peace.

A different kind of metropolitan life

Okay so now I have been here in Taiwan for five years and my Chinese is still deplorable. I’m living in Taipei …Yes lured back to the city, but Taipei isn’t exactly your average concrete jungle nor is it on the world’s travel radar.

When friends ask me what Taipei is like I’d say “Asian fusion culture and urban rush meets natural serenity”. I remember the very first day arriving in Taipei. My face dropped in awe upon seeing the city backdrop of mountains blanketed with clouds which was like something out of a postcard.

Winters are short, usually mild and the best time for a restorative dip in hot springs. Escaping winter blues means taking a 2 hr express train (HSR) to the south of Taiwan where sunny days and warmth meets palm trees.

My apartment in downtown Taipei faces a traditional night market where I grab my fruit and veg. Market mornings are a bustling atmosphere of fresh produce, vendors in all directions screaming to lure passersby while big trucks inconveniently unload right in the middle of pedestrian paths. As sunsets, red lanterns are lit, countless food stalls sell “xiao chi” bite sized snacks where I find myself walking slowly with the crowds and queuing for ages.

My teaching days in Taiwan are like a distant memory, now I spend most days embracing my new path as a digital nomad between Taipei and whatever destination in Asia beckons me.

Long commutes to work are a thing of the past, instead I walk into my office at home. Weekends are not filled with booze, it’s either spent in the countryside or cycling by Taipei’s riverside. 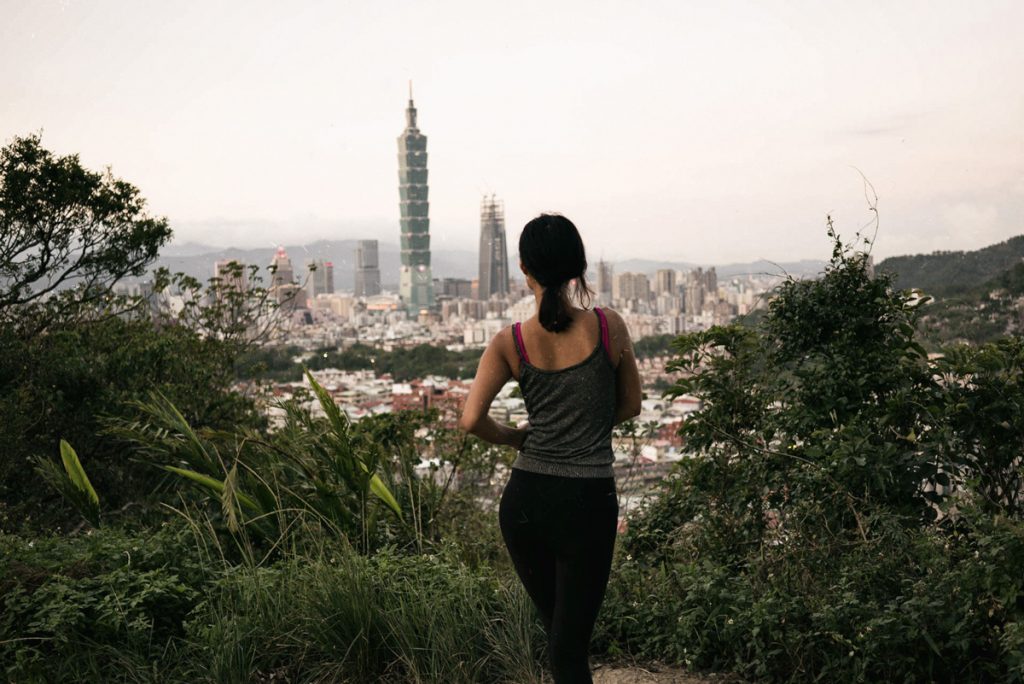 Hiking up elephant mountain rewards you with an amazing view of the Taipei 101 and the city skyscraper. 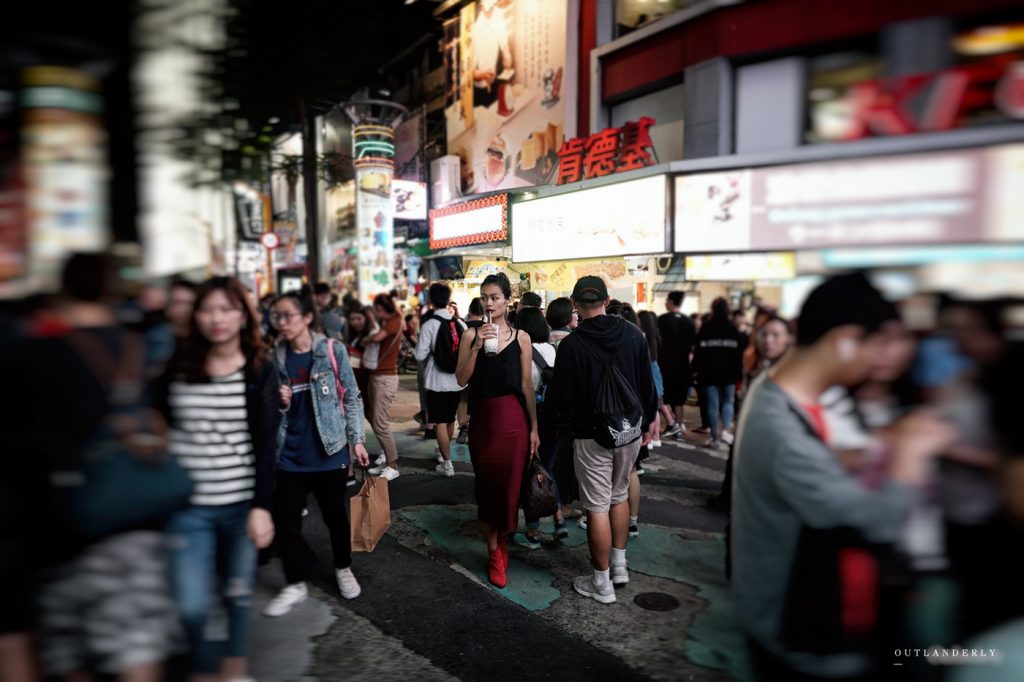 Of course, it’s not all picture perfect. I’m always lost in translation that everytime I see the menu in English, my eyes light up in glee. Sometimes I’m standing there, not understanding a word the cashier just asked me, and realising she just wanted to offer me were shopping bags while the customers behind me roll their eyes.

Feeling like an idiot is normal and knowing nothing, like John Snow. Luckily I’ve since learned not to care too much about situations like these. The challenges of living abroad have a tendency to humble you. My mindset became “Screw it!” I’ll have plenty of hilarious stories to tell to my fellow local friends.

Since moving to Taiwan, my attitude towards time has changed dramatically. I don’t worry so much about being late; I am sometimes on time (old habits die hard), but when I’m not, I’m not sweating in panic. And while I still get frustrated with how slow locals walk, I know that the payoff is feeling far less controlled by time and I enjoy the spontaneity that this adds to life. So what has kept me in this underrated city for 5 years? Being able to enjoy the comforts of metropolitan life at a slow pace and nature at my doorstep.

If you’re thinking about moving to Taiwan or already living as an expat, please share your experiences! I’d love to hear about them. 🙂