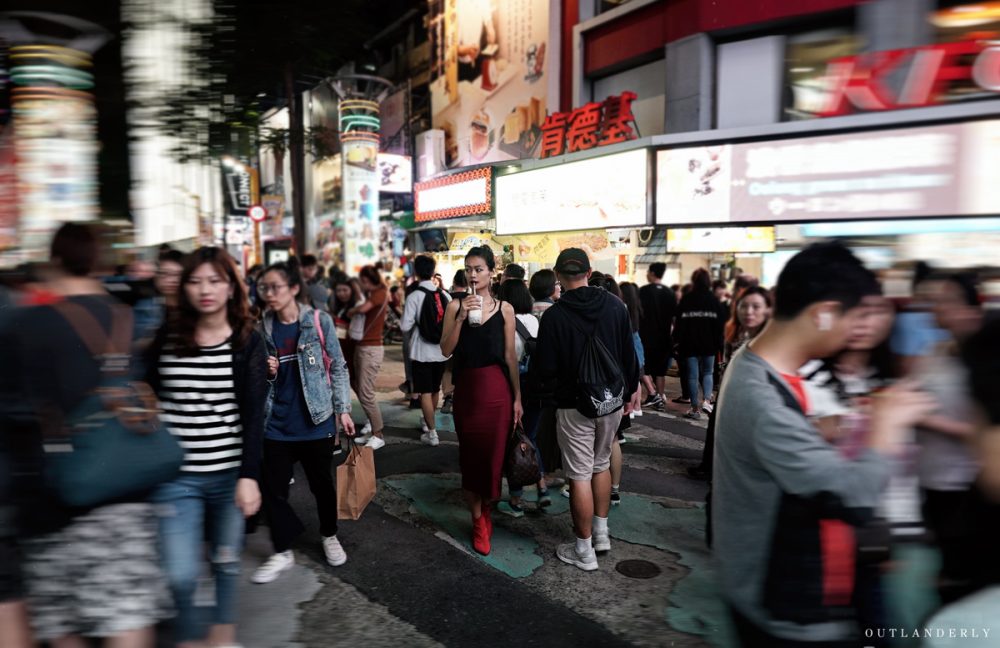 Ximending (Ximen) is where the young congregate. As one of  Taipei’s coolest neighborhood, this highly octane place will have you believing you’ve time-warped to Shibuya in Japan… well kind of.

Immerse yourself in an area with a high concentration of hip, funky, and weird things happening at once.

Once the sun goes down, the abundance of shops, street side restaurants, and the blinding neon lights will make you feel like you’re on a merry go round.

The street intersects with several other pedestrian streets, all of which offer a cool sight to witness pedestrians crossing, not quite like being in Shibuya, but still it’s cool to see the interesting streets sending people in all directions.

Ximending is a friendly “pedestrian zone” meaning no vehicles are permitted in this area. In fact, this place reminds me of taking a stroll along Hanoi’s Walking St. Of course, many say that Ximending is similar to some popular shopping areas in Tokyo.

The district is a vibrant and busy shopping destination with a younger hip crowd in mind. Stores are varied with high street brand names and super cute gifts and accessories.

Ximending is a friendly “pedestrian zone” which means no scooters nor cars are allowed. In fact, it reminds me of taking a stroll along Hanoi’s Walking street at night.  Of course, many will say that  Ximending is like many famous shopping areas in Tokyo.

Some of the best fried chicken can be found along the main walking and shopping streets of Ximending. Hot-Star Large Fried Chicken, just below KFC is the most popular place for a big slab of tasty fried chicken – be prepared to queue!

I hate queues with a vengeance, but the Fried chicken stalls here release the most heavenly smells of juicy fried chicken breasts. Not to mention, when in Ximen, I need my bubble tea fix!

Rising in prominence in the 1930s, Theatre Street in Ximending is a home to historical buildings with over twenty theaters and six thousand vendors, and is a popular area for small concerts, album launches, and street performances.

When in Ximen, it’s hard to miss the Red Theater. Located on Chengdu Rd, this historical building dates back to 1908.  The 2-story octagonal shaped building served as an entertainment center and had evolved throughout decades to become a teahouse and a venue for small-scale theater productions and events.

The Red Theater area is a popular gay hangout and attracts travelers and expats. Come the weekend, this strip of open-air bars comes to life – expect to see this place full of people sipping cocktails in the evenings.

After a couple of late night drinks, partygoers can head to PartyWorld for a private KTV session.

Halloween nights at the Red theater see a swarm of party-goers dressed as blood-sucking zombies and sometimes an expat in a cardboard looking like the Taipei 101. In fact, October 31st is my favorite time to mingle with Halloween goers at the Red Theater.

Take the MRT Blue line which stops at Ximending station and do take exit 6 which leads you straight to the entrance of the main walking area.